'A thrill of hope' to you all. 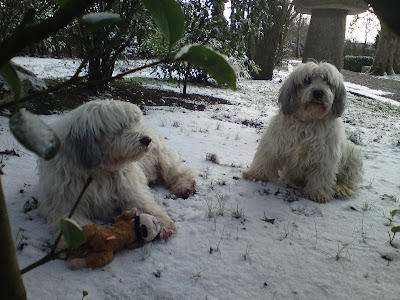 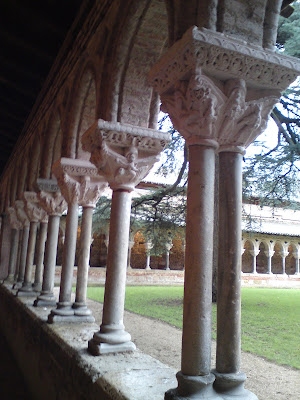 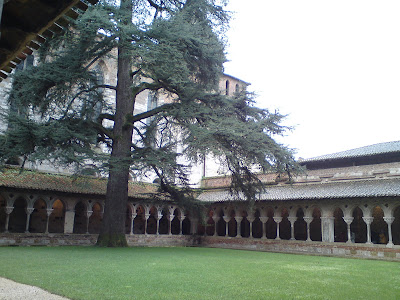 Over the last forty eight hours Wilf and Digby have taken to sitting in a corner of the kitchen, nose and eyes turned towards the oven . The undying hope that something will slip from our fingers and fall to the floor radiates from their faces. The two of them love all the attention they get at Christmas and run around like puppys but eventually all the high life of late nights and long walks catches up with them. Digby disappeared for half and hour last night in the middle of a game of catch and was found, snoring loudly under the granny bed , ball in mouth - the look on his face said it all 'peace and quiet at last'.

A simply glorious start to the Christmas morning here. A smattering of early snow has gone to be replaced by bright sunshine and a cloudless sky. There's a 25% chance that we will be able to eat our lunch outside on the terrace.

Moissac abbey was stunning. Some say it has the best carved 12th century church doorway in Europe. Even better were the cloisters behind which miraculously survived the revolution untouched. When we arrived there was absolutely no one else around which made sighseeing an unallayed pleasure. In the carol service it was soon evident that Celine Dion's rendition of 'O Holy Night' has become a cultural Christmas staple in France - the carol being (naturally) French in origin and Miss Dion being Canadienne ( ie French). Whilst Miss Dion's rendition is near perfect in both pitch and tone this is not necessarily true of the local versions which can best be described as displaying unbounded verve and enthusiasm . Much of the male component of the choir also play in the local under 20's rugby team so gusto rather than finesse is their hallmark - the line 'fall on your knees' lends itself particularly well to the vigorous style in vogue here in deepest Tarn-et-Garonne. At one excruciating high note ( at the point that it goes ' O night, O night di - vi-ii-ii- ne ' ) I found myself involuntarily, and ungraciously, making a mental reminder to myself to go to the dentist for a check-up . I caught sight of 'the font' ,who never criticises ,wincing as the choir lustily straddled the note. 'Perhaps it was the feedback from the amplification system?' Perhaps. Anyway, a great time was had by all - audience and choir.

There are two lines in the English translation of the carol that are intriguing . ' Long lay the world in sin and error pining ' is both wonderful English as well as an unusual example of pining, as in pining away. Even more unusual is the line ' A thrill of hope the weary world rejoyces'. There's something about 'a thrill of hope' that sums up everything there is about Christmas. What greater emotion could there be for the prisoner, the poor, the war bound, or the hospital patient? Even better, the use of 'rejoyces' rather than refreshes is quite simply glorious in its creativity. There is a singular poetry and sentiment lodged in our carols that is all too often obscured by the pace of the modern Christmas.

So, may all of us here wish that each and every one of you, whoever and wherever you are, receive the gift of 'a thrill of hope' this Christmas.