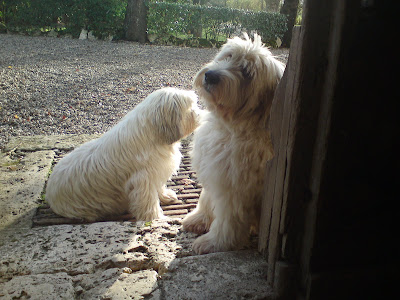 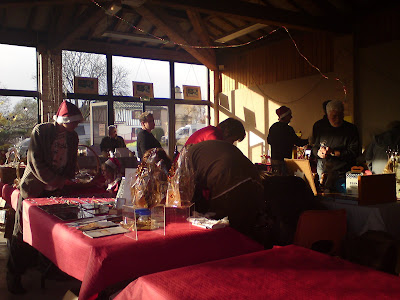 So, yesterday was the day of the village Christmas fair. Wilf and Digby were left at the front door to sit in the sun and guard the house while we walked the twenty or so yards across the lane and through the churchyard to the village hall or 'salle polyvalent'. The posters clearly stated the affair was due to start at two but experience of living in southern Europe has taught us to take notional start times with a very large pinch of salt. After allowing for what we thought was a suitable two hour delay we arrived at four to find a scene of unbridled chaos. There were six or seven ladies dressed in skimpy red Santa outfits running aimlessly around, the stalls were still in the process of being set up, the mayor had hurt his hand putting up the creche and was having it bandaged by a red cross lady, a mother with a young baby was slumped in a plastic chair by the entrance door breast feeding ,and loud metallic crashes were emanating from the kitchen. Pure,unadulterated bedlam.

We executed a rapid exit from the unfolding maelstrom and returned home to allow another three hours for the fair to get into the swing of things,returning after a glass or two of wine at seven. I should state for the record that 'the font' promised that we wouldn't have to stay more than ten minutes and that all I had to do was buy three things from the stalls and be polite - not charming just polite. How the best laid plans....

What a difference the three hours made. There were crowds swarming around the churchyard when we came back and the square had developed a parking problem. No sooner had we walked through the door than Madame Bay emerged from the throng to greet us. She approached arms spread wide, like a brightly coloured Spanish galleon in full sail, imperiously pushing visitors,Santa's little helpers, stall holders and small children aside. Immediately everyone in the village knew from the greeting that we were the new residents and that Madame Bay was our chatelaine. 'Ah! M'ongoose,Bonsoir,M'ongoose' was the last I heard before being enveloped in yards of velvet and chiffon and smothered in Lily of the Valley. Madame Bay as you may remember was in charge of what we thought was the bakery stall. As it transpired she had a much more vaunted task and was in charge of the restaurant, or 'restaur' as the sign above the door said, Monsieur Bay having managed to lose the last three letters en route from home. 'Have you eaten Monsieur Ongoose, have you eaten ?'. Before I could answer , we were swept through the hall, arm in arm with Madame Bay to the restaur ,seated at a rather precariously put together trestle table and handed a sheet of paper grandly headed 'menu'.

Madame Bay and her village helpers have discovered pizza. However, nothing, but nothing in life could prepare you for one of Madame Bays Christmas interpretations. As I scanned the list of toppings my eye first came to rest on a creation called Sea Medley which consisted of 'prawns,prunes,chopped beef'. In a state of mounting shock and horror I read on - The Gascon : 'fried egg,pork sausage,4 local cheeses,anchovies,chicken'.

Tomorrow, I shall attempt to describe what we ate,post a copy of the menu for an unbelieving world, reveal what we bought ,and relive, as far as I can, the 'entertainment' . More than that I shall try to understood how the French have managed to convince us all that they are somehow more sophisticated.

Labels: Pizza unlike any other, Polish Lowland Sheepdogs, Wilf and Digby