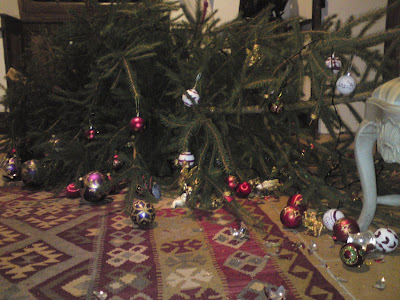 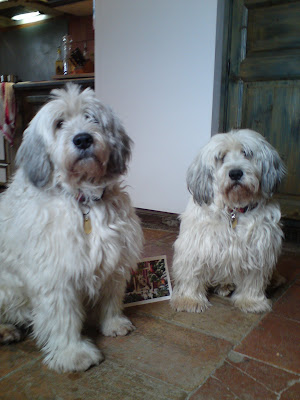 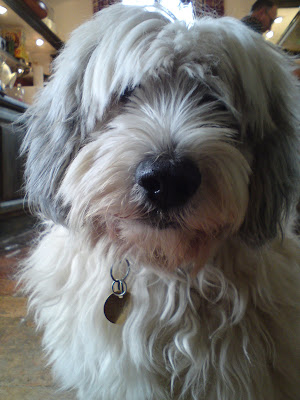 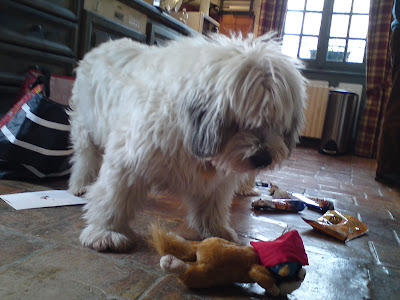 Heavy frost this morning and the sky that strange crystal blue colour that always accompanies extreme cold. We've both taken to wearing ski hats indoors in an attempt to cope with the arctic draughts that sweep through the windows in our large old rambling house. Despite having the boiler turned up as far as it will go the rate of heat loss always seems to exceed the rate of heat generation - at night it gets decidedly chilly although ice hasn't formed on the inside of the windows yet. From time to time we both look at each other and say that this is the sort of experience that makes buying a large unrestored house worthwhile and that we are storing up a treasure trove of knowledge. If we were American we'd write a book about it - " for the price of a secondhand Buick and with the loving help and support of a few dear neighbours and friends we turned a ruined barn in Arangoset into a stunning example of contemporary architecture". Baloney ! Anyone who moves into a house , in the middle of winter,that hasn't had any TLC in twenty years deserves to suffer. I'll tell the family at Christmas that it's character forming as we huddle around the open oven.

In search of wood fired stoves we drove into the local town of Auch yesterday afternoon. A beautiful cathedral and a quite unspoilt market square. It seems that the days when you bought a stove, lined the chimney, and then connected the two together to generate a functioning heating system have long gone. Our respective hearts sank as the salesman informed us that there were new regulations. In France there are regulations for everything - most of them being 'new' and therefore subject to interpretation.It seems that in order to reduce the risk of fire no chimney lining can be installed within 16 centimetres of a wooden beam - with our attic a veritable forest of wooden beams that is a tough stipulation to follow. When asked if they could come out to look at the house and instal a stove they said 'but of course' and gave us a date in February. Perhaps I'll book everyone into a hotel for the duration.

Madame Bay arrived this morning with a cheery 'It's cold ,m'Ongoose, it's cold'. Madame Bay is largely in green today, the chiffon replaced by a large multi coloured woolen creation that swaddles her neck and the lower half or her face - in fact this mornings greeting was muffled by the acres of woolen scarf and came out as ' mmmwah, mwongoose, mmmwah'. I note that Madame Bay is wearing trousers under todays ensemble - a sop to the elements - giving her something of the look of a Tajikistan mountain tribeswoman - tres chic.Wilf has ignored her, while Digby is keeping a wary eye on her in case she makes a sudden dash for the hoover

A parcel from America arrived in the noon time post - the prize in a competition mounted by Rocky Creek Scotties and Java. Wilf and Digby knew immediately it was for them. Despite every best effort to get the two little angels to strike an appreciative pose for the camera the photos above are the best you're going to get. Also a picture of the Christmas tree in its forlorn, pre-trussed up with wire state.