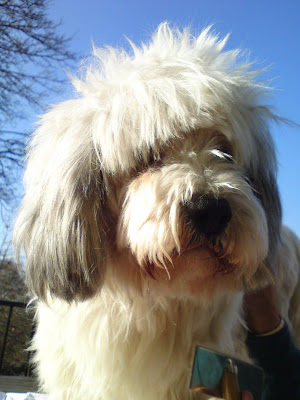 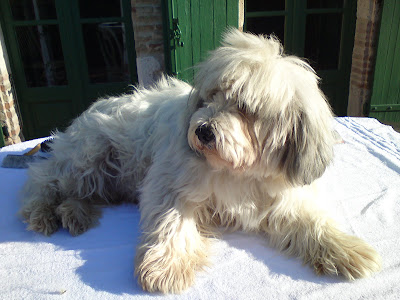 We woke this morning to find a raging blizzard swirling round the house and the poor palm trees in the garden covered in thick snow - somehow the dappling of snow makes them look strangely exotic - it must be the juxtaposition of the tropical and the arctic. The morning croissant run with the boyz was cancelled, not that I doubted the Land Rovers ability to deal with the conditions, but because Wilf and Digby steadfastly refused to venture beyond the porch. Wilf just gave me one of his 'you must be joking ' looks and turned tail back into the house closely followed by his little brother.

Yesterday was a major grooming day for the boyz. A week of running around in the garden has transformed their coats from their natural, soft, fluffy white condition into a grey and brown matted morass. Thankfully, Digby simply adores being groomed. He spreads himself out on the table, basks in the sun, and exudes happiness. After forty five minutes of careful brushing the waif like dog had been transformed into something looking vaguely like a cross between a Polish Lowland Sheepdog and a Dandy Dinmont. Wilf by contrast views grooming as something that should only happen to girl dogs. He squirms, whines, wimpers, holds out his paw, circles round, lies on his back, scratches his ear and utilises every trick in the book to avoid being put on the grooming table. Once he's there it's no better. Of course all the investment in grooming time and attention has been rendered completely valueless by the arrival of heavy snow. When the two of them do deign to venture outside the snow will cling to their coats in great lumps like iron to a magnet. Blankets and towels have been laid in the hall to soak up the melting lumps of snow.

France Telecom came to repair the supposed broadband access yesterday. The engineer took Gallic taciturnity to the extreme but the intermittent fault that has plagued us since we moved in seems to have been resolved. I've discovered that 'the font' is much better at dealing with the difficult representatives of the French state in its many guises - I simply get exasperated whereas 'the font' employs charm and succeeds.

I caught a sobering glimpse of Madame Bay in the kitchen, completely lost in the reverie of her thoughts, dancing to one of those French ballads with a heavy beat and annoying lyrics. One would have to say Madame Bay dances with an unexpected delicacy for a lady of such statuesque proportions although the occasional rapid up and down movements with the right arm were perhaps a little too 'Saturday Night Fever' in style to be termed truly delicate. I tiptoed gently away before being asked to join her on the impropmtu dance floor. The happy dancing routine is a sign that the Bay family is getting into the party mood and will shortly be en route to Manhattan for Christmas - if any of you are booked on the Air France A-380 from Charles de Gaulle to Kennedy on the 22nd and are seated next to a group of lively seventy somethings - you, and Manhattan, have been warned.