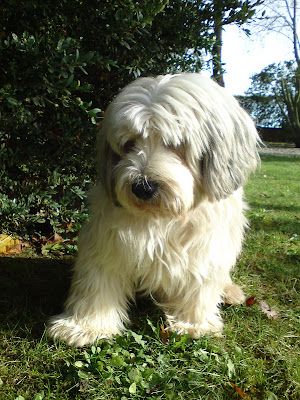 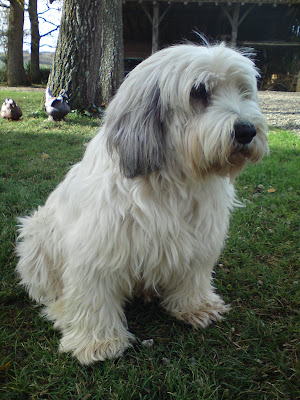 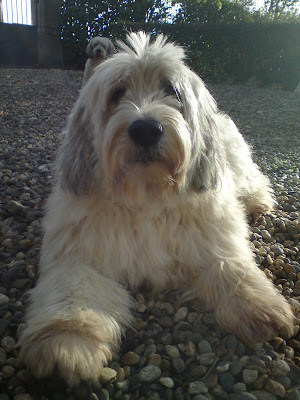 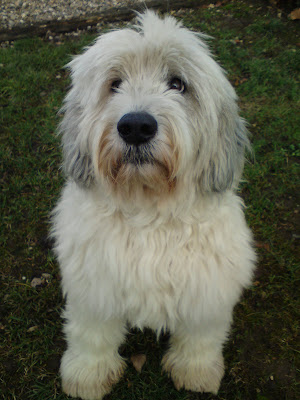 'The font' is in London today having set off for the airport at the unearthly hour of four thirty. Wilf and Digby who were snuggled down in their baskets decided to ignore the intrusive early morning activity and get on with their beauty sleep. Belatedly recognizing 'the fonts' absence the two of them have been positioned by the front door since seven o'clock. Half of their sheepdog DNA is set to guarding the house while the other half is on alert for signs of 'the fonts' homecoming. Getting Wilf out for a walk while Digby stayed inside to rest his joints proved impossible. In the end I took them both out on their harnesses, doubled back to the house after five minutes, opened the front door to let Digby in, and then callously closed it so that Wilf could have twenty minutes of exercise. Digby was so shocked by the rudeness of being left alone that he didn't bark once.

To finish off yesterdays post. The pizzas we chose at the village Christmas fair were the blandest I could find - cheese and ham. Madame Bay was very keen for us to try a 'Tex Mex' ( chicken, 'hot'red peppers, tabisco,sausage, pineapple) and seemed rather disappointed at the mundanity of our choice - I fear that we gained a negative score on the village sophistication rating. The unspoken hint was that we clearly need to get out more. I'd hoped that the pizzas might have been served by the slice but the suggestion only elicited a blank response from Madame Bay. When they arrived , served by Monsieur Bay in his role as maitre d' , they were dinner plate in size, surrounded by a large quiche like crust, and so hot that the surface of the cheese was gurgling away with myriad mini-volcanoes.It quickly became apparent that somewhere along the line the recipe for pizza and quiche had become confused- the wonders set before us had a thick shortcrust pastry base,the creamy ham and cheese topping from a quiche,but the whole enlivened by copious quantities of extra lard and butter. I suggested to 'the font' that we had discovered a new delicacy - Quizza but after three mouthfuls 'the font' felt that Bloat might be a better word to describe this culinary marvel. By the time it had been washed down with a heart little Gaillac,recommended by the maitre d', we were both feeeling rather the worse for wear - our digestive systems assailed by this wall of piping hot cholesterol.Saturday night was not restful for either of us.

Sometimes through the anonymity of the blog some peoples strength of purpose and courage come shining through. So for the author of http://www.romp-roll-rockies.blogspot.com/ just a heads up that we're thinking of you today.