Light snow,T.S.Eliot, and the 'wild creatures'. 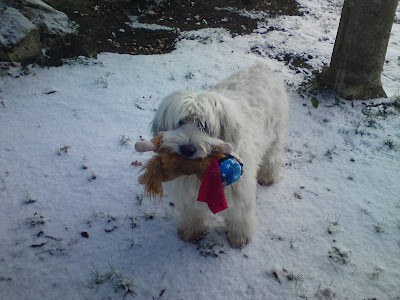 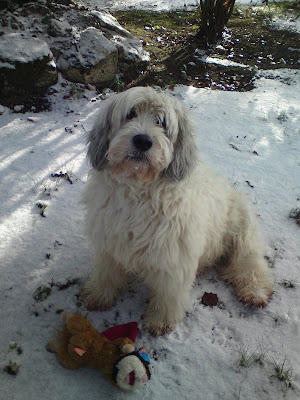 A light dusting of snow from the Pyrenees but otherwise a lovely start to the day. Wilf and Digby went rolling on their backs in what remained of the snowfall and were soon charging around following squirrel scents. It has become well nigh impossible to separate Wilf from his latest toy which is carried everywhere. The plumber arrived at seven thirty (unexpectedly) to start installing the new eco-friendly boiler and to top it all the DHL courier phoned at eight to say he would be delivering some parcels from 'Grande Bretagne' sometime today. He pronounced 'Grande Bretagne' hesitantly (and did I imagine it, distastefully?) as though it was somehow a deeply mysterious place populated by 'wild creatures from the north'

Over dinner we learnt that T.S.Eliot apparently thought the most succesful lines he ever wrote were part of the "water dripping song" in part v of The Waste Land:

If there were the sound of water only

But sound of a water over a rock

Where the hermit-thrush sings in the pine trees

But there is no water