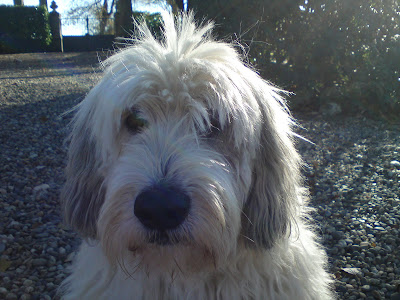 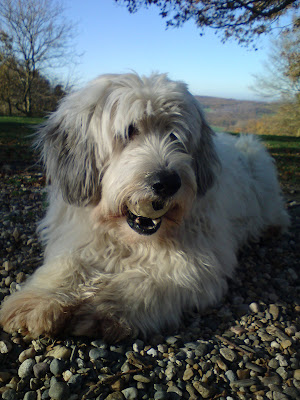 A gloriously sunny morning enticed the two boyz out into the garden bright and early for a bout of squirrel chasing. The fact that the two boyz have never got within twenty metres of a squirrel doesn't deter them from trying. Perhaps if they understood that squirrels can climb trees their record , and technique, might improve.

The plumber was here again working on the instalation of the new eco-friendly boiler. Anything has to be an environmental improvement over the gas guzzling, water churning monstrosity that currently lurks in the cellar. Everyone in the house has been warned about the ageing boilers propensity to produce a wave of super heated water every 110 seconds or so - a happy shower takes 109 seconds .

To the local supermarket with Wilf and Digby for all those things that I was supposed to have bought last week . The aisles were full of what might politely be called characters ie local farmers dragged out for their once a year shopping expedition with their wives . They had clearly had an Armagnac enhanced post-milking breakfast - the bright red noses said it all . While I was at the supermarket 'the font' was at the butchers enjoying a glass of mulled wine with the other customers. Where else in the world would you go to the butcher and be introduced as 'the Scottish family' to all the regulars ? There was much shaking of hands - something that the French do every chance they get - frequent and repeated handshaking is a social formality here that has pretty much been lost in the UK. We are apparently having chapon instead of Turkey for lunch tomorrow followed by the Fortnums pudding. Being a Calvinist household where time should be spent purposefully we are now off en masse to the old twelfth century Abbey at Moissac for some culture and carols (and hopefully a glass or two of an appealing burgundy if 'the font' can be persuaded to drive back).