Digby faces a new day - from behind a tree. 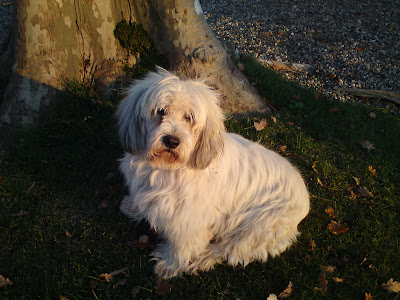 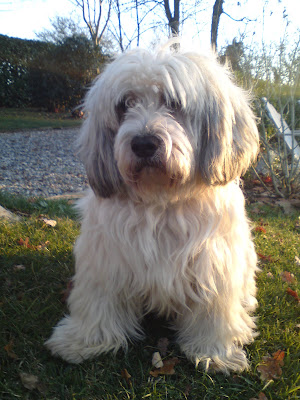 The cold, still, calm weather of the last few days has been replaced by a stiff wind blowing down from the Pyrenees bringing milder air - the temperature must have risen six or seven degrees overnight. With the ice gone, Wilf has been able to resume his 'on guard' position by the front gate ready to bark at the palm tree each time its fronds rustle in the breeze. Digby has propped himself up in the lee of a large plane tree where he can observe all the comings and goings without having to exert himself too much.

The family are at last en route to Toulouse and there is a chance that by midnight tomorrow the logistical nightmare will be behind us. A few problems remain such as cancellation of the Eurostar cross channel trains , snow closed airports in the US , and seasonal chaos at Heathrow. 'The font' stayed at a hotel at Terminal 5 last night and retreated in horror from the restaurant where long lines of stranded Boston and Kennedy bound passengers looked as though they had settled in for the duration.

Christmas garlands to jolly up the front gate were delivered at seven thirty this morning. When I went to hang them up they immediately crumbled into twenty or thirty pieces. The florist had made them out of that strange green water retentive material and had left them to soak overnight .By this morning they had absorbed so much water that they had tripled in weight and lost any torsional strength they might have had .Hang them up and voila watch gravity do its trick. I leapt in the car and took them straight back. My remonstration was met with a Gallic ' c'est la vie' shrug of the shoulders. After a somewhat lengthy conversation they have agreed to make new ones - the inference being that it is entirely my fault .