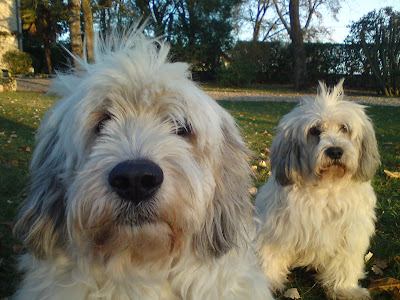 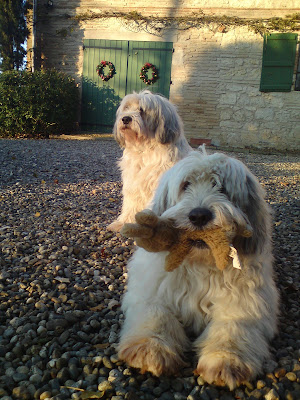 Wilf and Digby adore porridge. In these arctic conditions we boil up enough oatmeal at breakfast for ourselves and for them .They wait patiently side by side in the kitchen like two canine gourmands, relishing the smell of the porridge while it cools. When its ready they hunker down over their bowls where amid much lip smacking and delighted snorting it's quickly demolished . We find that Wilf gets indigestion and allergies if we give him wheat based food ( an after effect of the pancreatitis) but porridge he can eat to his hearts content. Not surprisingly the boyz muzzles require a thorough cleaning post breakfast to remove the last of their breakfast from the long fur around their mouths.

We are anxiously waiting for new beds to be delivered from London. When we first moved in, seven weeks ago, I ordered replacement beds for the ones we had left behind in Italy. It is only now, with the imminent arrival of family,that the manufacturers dilatory approach and frequent last minute delays in getting them to us is becoming irritating. Having been told they would be here on Friday ( at the latest) they are now promised (firmly and finally) for Monday - snow willing.
Posted by Angus at Saturday, December 19, 2009