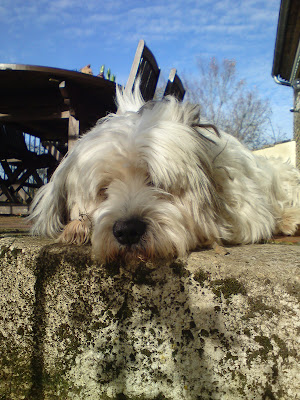 Yesterday it became apparent to us that the two playful pups who have been our companions for the last eight and a half years have made that gentle transition to senior dog status. It was a beautiful sunny day and after lunch on the terrace we decided that a walk in the fresh air was in order. There was a time not so long ago when Wilf and Digby would have been howling with delight at the thought of a new adventure but now they are happy to slumber in the warm winter sun. We left them alone and returned forty five minutes later to find the unchanged scene in the photos above.

Out for dinner with a rather successful American authoress who has just lost her husband of thirty years. In the circumstances told to be at my wittiest and most upbeat . All those difficult decisions now come cascading down around her , the whether's of life. Whether to leave the house that holds so many memories, whether to return to a US that has changed profoundly, whether to try to make new friends and risk losing old ones. And through it all that occasional look in her eyes that yearned that things could be as they had been. Many years ago, before anti-depressants, my mother used to tell the recently bereaved that it took eight seasons to recover from grief. How true those old Scots aphorisms are. Time as the great healer.