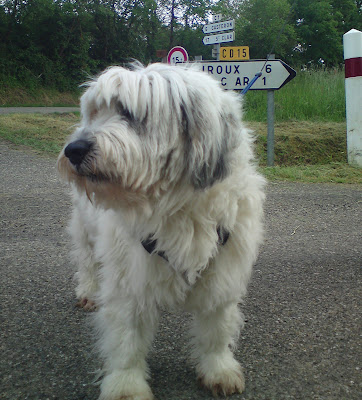 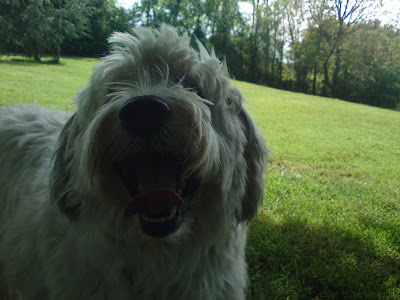 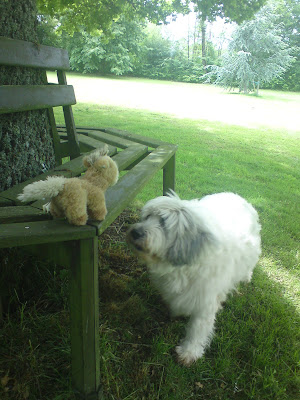 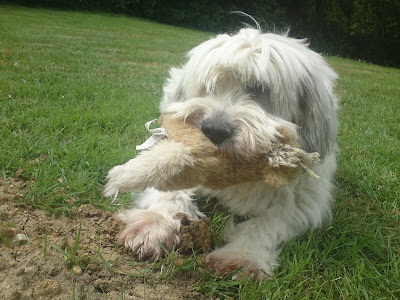 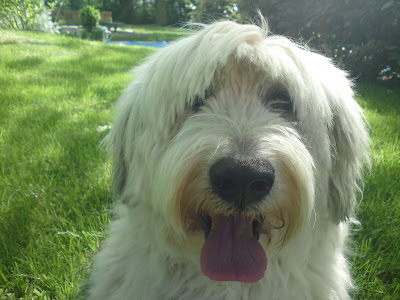 The cold weather snap continues - after four days I guess it's no longer a snap, more of a spell. Madame Bay does not like the cold. She arrived yesterday dressed in here 'stave off the chill' attire of black leggings, what appeared to be a black cocktail dress, and a formidable black padded jacket. The tout ensemble was offset by a rather frightening day-glo turquoise pashmina. The stridency and idiosyncracy of the pashminas colour stood as testimony to recent , and not entirely beneficial, advances in the chemical dyeing process. On her head was perched one of those felt Peruvian hats with ear muffs and a point that tips forwards. A set of pan pipes and the image would have been complete. Oblivious to the heat being churned out by the central heating system the windows were soon flung open, the duvets hung out to air and the house was echoing to the sound of the nostalgie channel and Madame Bay's very own sing along versions of Olivia Newton Johns top hits . Wilf and I headed out for a long walk with the sound of "Fizzeekal, fizzeekal, les ges fizzeekal" echoing in our ears.

While the warmly wrapped figure in black and turquoise was atonaly hoovering the upper corridor , Yves, Ross and the morose lad in the blue bib overalls arrived to start work on the decking in the garden. Ross informed me that the methadone for his bad neck was working well . Somewhere along the line he seems to have got confused between methadone and morphine - even in the local health system here in deepest France profonde methadone would be an unusual treatment for lumbar pain. Some things are best left unchallenged. I asked Yves why they were starting work on the decking when the library was only 7/8ths finished . This simple question got an 'oh la la' in reply , a sure sign that he had been caught out. 'Oh M'Ongoose I wait for the paint to dry'. After twenty minutes they all disappeared announcing as they left that they were going into Agen to get a special cutting blade . That was the last that we saw of them.

The concert is now only three weeks away. The posters are still lying very visibly on the mayors desk in the town hall. A meeting to remind everyone of what their agreed responsibilities are seems to be in order. The first whiff of looming disaster ?

Wilf continues to make progress. Swing biffing and rug surfing have returned to being central parts of the daily routine. 'The font' is back off to London this morning for two days so it's dawning on him that culinary standards are about to take a major turn for the worse.