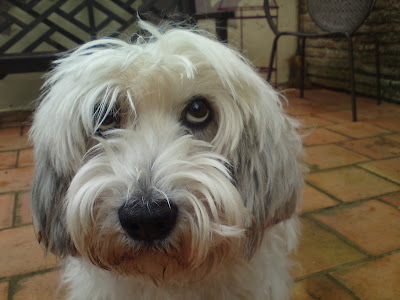 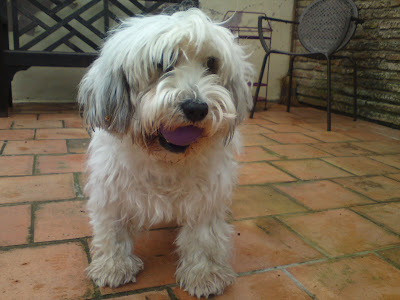 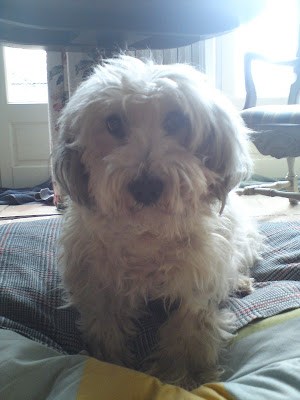 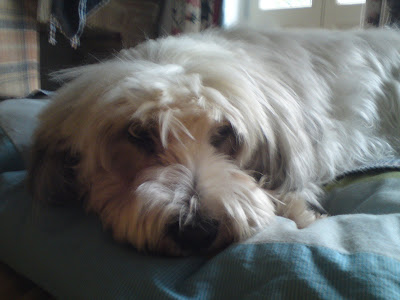 Out of the blue we've been exposed to a blast of bitterly cold, torrentially wet weather. In the rickety old farmhouse the downpipes are overflowing, the gutters are leaking, and the recent excavation work in the garden has turned into a sea of mud. The morning news broadcast is full of scenes showing the Pyrennees blanketed in an unseasonably late fall of heavy snow. Even Wilf who goes through life oblivious to the elements decided to stay indoors. One look out of the front door and he was back in the hallway on a blanket. He's adopted the attitude that he's not sure about global warming but is a believer in climate change.

Yesterday morning the committee arrived to finalise details for June's concert in the village church. Madame Bay was on hand to usher everyone into the dining room , her persona changing depending on whether the arrivals were 'floral village' or 'beautiful highways' adherents. After last weeks contented display of flatulence Wilf was relegated to the kitchen. The meeting started with an update on the mayors hand ( much better unless it's a really cold day ) , the surprising brisqueness of the new girl behind the pharmacy counter ( apparently she comes from Lyons so what can you expect ? ) , the health of the little lady in the purple hats mother, and the state of the kitchens in the old folks home. Hypocondria is a constant sub-theme of French provincial life. It was finally agreed that the Mayors wife would be responsible for taking the reservations, issuing the tickets and looking after the money. As Madame mayor only speaks French and some of the concert goers might be foreign ( no offence Ongoose ) she will be helped in this task by the Office de Tourisme in the market town . A top up of coffee, another pain au chocolat ( only if we must ), a story about someones aunt who is going into hospital in Toulouse and they were off.

Yesterday was a a good day. In fact it was a very good day. Little victories don't win wars but we recorded a number of firsts :
First time in three weeks Digby has played ball with his brother,
First time in two weeks he's eaten from his bowl rather than be fed by syringe,
First time he's had the strength to walk down the stairs in weeks,
First time since the Piroplasmosis was diagnosed that he's slept all through the night,
First full day in weeks that he's held down his food
and best of all
First time he's cocked his leg and stooped in ten days.

Little things are reassuring. With him eating again we're going to try him on fish and yoghurt ( he'll only touch fish ) and see if Milk Thistle can do anything for the liver damage. Any thoughts on gentle remedies for severe anaemia and jaundice ? Overnight his temeprature is rising again - back to above 39 - a worry. For today we're just going to focus as much as we can on the the positive developments.