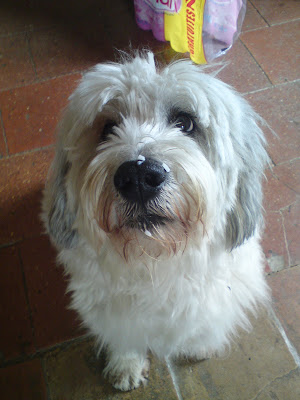 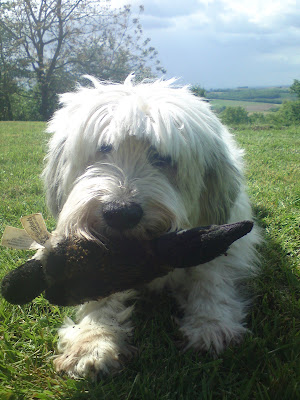 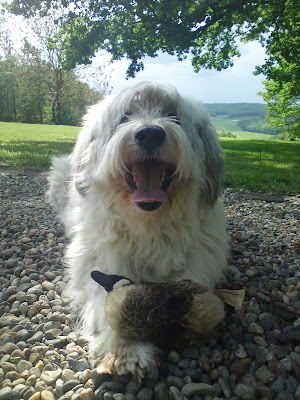 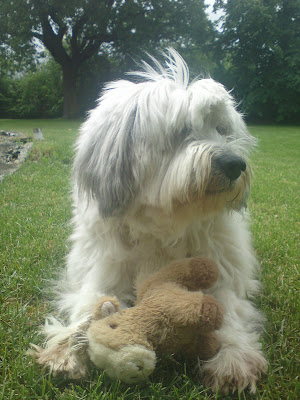 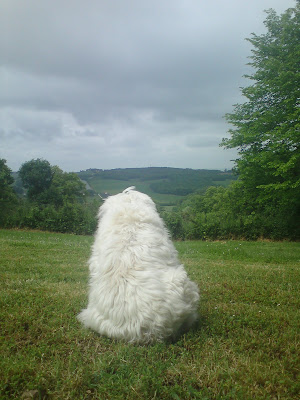 Wilf is waking up to the fact that being the only dog in the house has some advantages. He receives 100% of our attention, he doesn't have to share the soft toys that are strewn around the garden, and most importantly of all he can sit in the kitchen watching the food being prepared without a little brother distracting him. All in all it's clear that his deep depression is lifting and he's gradually returning to being his happy, carefree, clowning self. The daily routine of pre-bedtime rug surfing and mid-afternoon swing biffing is once again firmly in place. He doesn't know it yet but being the sole object of our attention has some downsides. After a month of being spoilt rotten his decidedly non-hour glass figure is about to undergo some focused weight loss therapy.

The improvement in Wilfs demeanour means that the rush to find a new companion can be conducted at a more structured pace. We'll see how he adapts to his new 'sole dog' position over the next week or so - who knows he might enjoy it. In the meantime we'll continue to do our homework on breeders, pups and rescue dogs. We spoke to the Ministry of Agriculture in London yesterday about the requirements for exporting a puppy. European Union bureaucracy makes it impossible to transport a puppy before 12 weeks. An additional 3 weeks is needed to get a British pet passport that records all the vaccinations etc that are required. If my math is right that means that any new companion would be at least 15 weeks old before we could pick them up - not an ideal age. The obvious solution is a French, German or Belgian breeder. There is also a rescue dog in Germany that one of you kindly e-mailed us about. We're checking it out. Later this week we're going to drive him up to a PON breeder near Biarritz to meet some young 'uns.

The secret of the disappearing coffee cups has now become apparent . Madame Bay. For some reason known only to herself she came into the house while we were out walking Wilf and moved all the mugs from the upstairs kitchen to the summer kitchen on the ground floor. The rationale for coming in at eight thirty on a Sunday morning to put all the mugs in the downstairs dishwasher defies explanation. She must have been awake in the small hours thinking about rearranging the kitchens in readiness for the move onto the ground floor to escape the summer heat. We take it as another sign that while we think we own the house in reality we are just its guardians until the next owners come along .
Posted by Angus at Tuesday, May 18, 2010