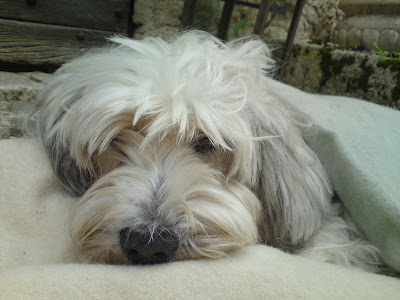 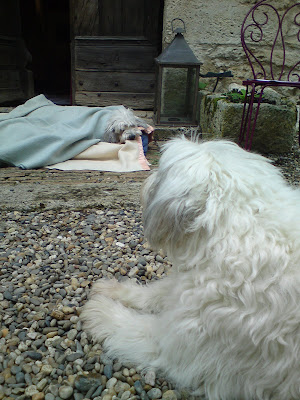 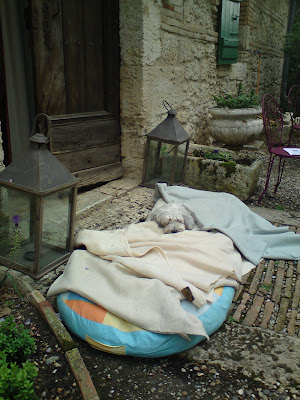 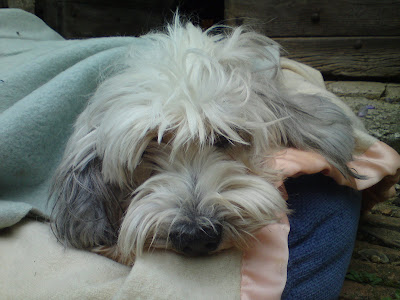 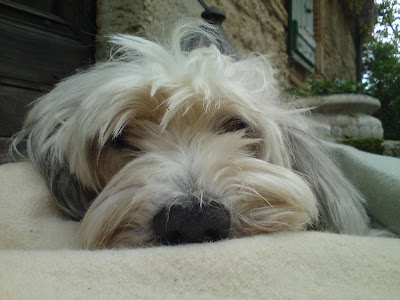 Last night someone commented that Digby must have the whole world in his corner. What a lovely thought . Anyway, all that positive support from across the globe and the care of whatever angels look after small dogs has kept him battling away for another day. The two 500mg doses of Aspirin have brought his temperature down to 38 but he has no interest in eating anything at all and is happy to just lie and sleep. The red blood cell count is very low , the white blood cell count is rocketing and the blood sugar levels are all over the place. Despite it all he managed at one stage to walk six or seven faltering steps into the garden to be with his boys who are home on holiday - his body was slumped but his eyes glowed as they stroked and tickled him. For a while he was back to being a puppy , running on the beach, chasing seals, and playing with his pack.
We're seeing the vet later this morning and over breakfast I gently suggested to 'the font' that perhaps now is the time to recognize the inevitable and help him along on his journey. The reply was a very firm and very emphatic 'no!'. We would know when the time was right . For those of you who are new to the blog I should give you just a little background history. Last year we had a rather unpleasant robbery . Digby fought to defend 'the font' from the attackers despite being kicked and beaten with a fire iron. When ,under a hail of blows and gunshots he finally had to retreat under the bed he carried on fighting and barking out warnings until the police and ambulance services arrived. His little body might have been bloodied and bruised but when danger came he was willing to give his life for his family.
When faced with a commitment like that our duty is clear and unsentimental. No room for mawkishness here - just a simple covenant of trust between dog and family. While he fights, we fight alongside him. When he tells us its time to go we'll listen and act. What are a few sleepless nights ?. To some he may just be another dog but to us he's shown that he has the heart of a lion and the soul of a warrior.

Update - Just back from the vet. A stark summary - nothing more to be done and no point in coming again. Although not unexpected it's upsetting to hear it spelt out with such blunt finality. He's lasted a week longer than expected. Digby will now be at home while everything shuts down. He's not feeling pain but the vet will come over when the call needs to be made - he's said the first signs of blood in Digby's stools or urine will be the time to act. Have just given him an insulin injection and he's settled down to sleep.