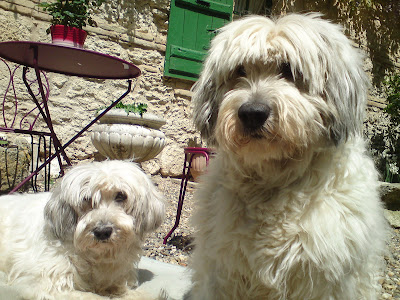 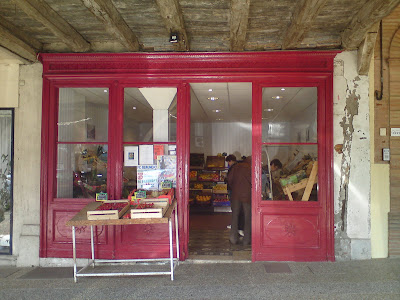 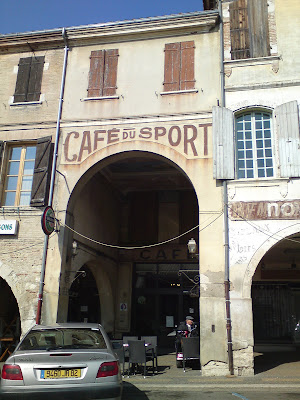 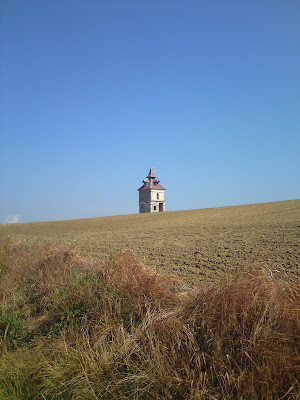 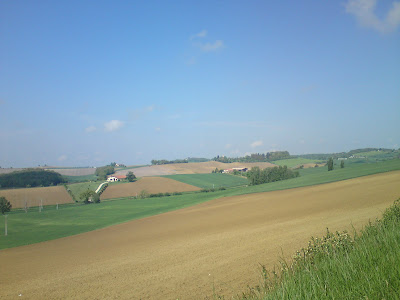 Off bright and early with Wilf in the car to the local town. First port of call the greengrocers for the ingredients for a new recipe 'the font' wants to try for hot strawberry and rhubarb pie. Then to the market for some fresh asparagus before finally stopping off for a coffee at the rather rundown 'absinthe drinkers' cafe under the arcades. No matter how early we get there the bar is always full of locals having a pre-breakfast beer or glass of absinthe - one of those culture shocks that come with life in deepest France profonde. Wilf sat contentedly with me at a table outside enjoying the sunshine and people watching.

Fridays storms have gone to be replaced by endless blue cloudless skies and a warm cosseting wind. We came home on the back roads past an old pigeonniere tower standing alone in the fields- most of them have gone - snapped up by holidaying Parisiens and incorporated into bijoux weekend homes. It would have been wonderful to have stopped the car and set off with Wilf for a brisk walk through the wild flower meadows towards the Pyrennees but the ever present spectre of piroplasmosis is changing all our routines.

Digby had a quieter night after the strong toxic reaction to the medicines of the night before. He had a simply wonderful day outside with his brother, playing in the sunshine and forgetting his aches and pains. We enjoyed it every bit as much as he did. This morning he's peaceful but subdued. Wilf is sitting proprietorially beside him on the sun drenched front doorstep. One of the interesting discoveries is the strength of the bond that exists between the two them - brothers and best friends . Little brother and guardian.

Later today the little market town will be gearing itself up for the Victory Day celebrations. We'll drive over again before lunch to see what is going on.