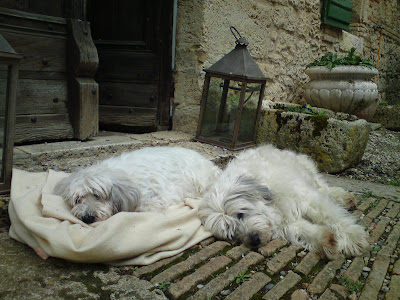 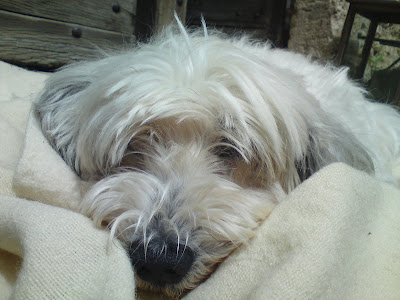 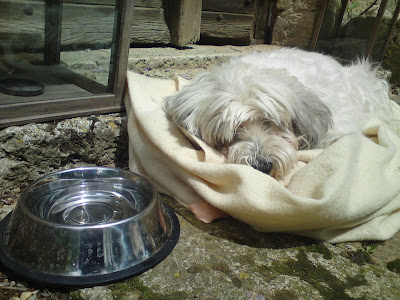 Insulin injection administered Digby's been carried outside and is sprawled out on his bed in the morning sunshine. An increasingly proprietorial big brother has adopted a blocking position next to him. So far today Madame Bay has tickled him on the head and the local farmer has stopped at the garden gate to talk to him. By lunchtime he'll have seen the mayor, the local builder, and the children from the school bus. In farming communities like this the importance of the dog in the scheme of things is understood and people react in a quite unselfconscious way.

Yesterday Digby spent his day being spoilt rotten by his boys. Although he can't really move it was clear that for a while at least he was back at the centre of the pack he first knew nine years ago - no pain, no discomfort, just adventures and contentment. He'd fallen into a blissful sleep by the time 'the font' drove the family to the airport for the last flight back to London . Although he's now stopped eating we're so,so glad that we didn't do anything to deprive him of this period of pure happiness.

Tonight the village unveils its pride and joy - the reconstructed sixteenth century pottery kiln. We'll split the festivities so that Digby isn't left alone. I'll go the grand opening while 'the font' will mingle with the crowds at the 'apres unveiling' gathering in the village hall. Madame Bays contribution to the proceedings is an armagnac based punch. Before leaving the boys tried it - the phrases 'industrial alcohol' and 'quite a buzz' were heard.

Can I once again thank you all for your kindness and support. In a hard hearted world it would seem quite illogical that people should take the time out of their day to think of a small dog in France. Perhaps that's the joy of it all - the world is illogical,unsolicited words of kindness from strangers do mean something, and hard heartedness isn't universal. Thank you all.