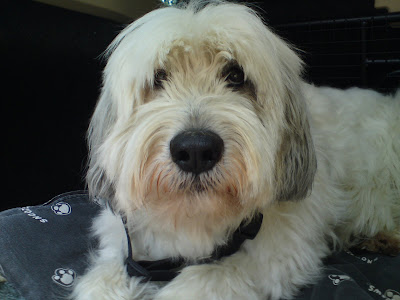 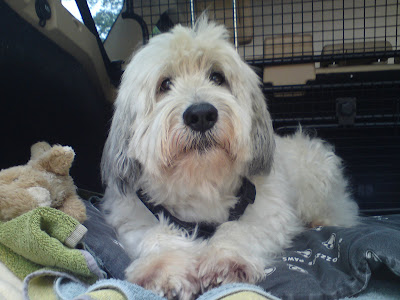 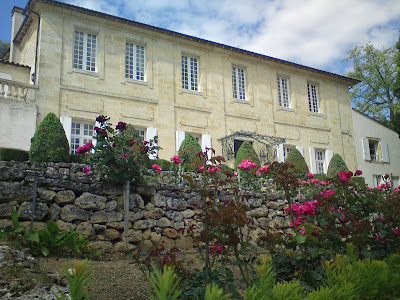 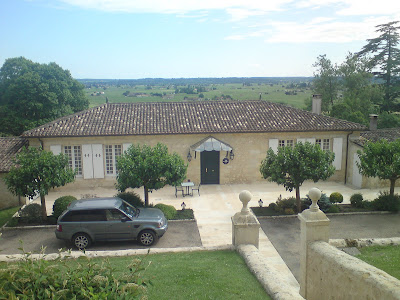 Beautiful weather so off with Wilf to spend a night in a hotel and buy some wine. We loaded up the big SUV with its ferocious air-conditioning system and set off for Bordeaux and the beautiful little town of St.Emilion. No matter how hot it gets the big engined monster allows us to travel in comfort up in the front 'zone' while Wilf luxuriates in his own sub-arctic microclimate in the back.

This is his first outing as a 'solo' dog so we were keen to see how he got on. Travelling with his little brother always used to be something of a lottery. Most times the little one would sail through a hotel lobby without a murmur . However, occasionally he would sniff the pheromones in the air and take a sudden and immediate dislike to a doorman or a bell boy - turning into a little white mound of loudly barking , constantly squirming fluff in the process. We eventually learnt that we should ask for a room with wheelchair access, that way we could avoid revolving doors, uniformed staff, and leg cockingly enticing statuary.

Wilf, being Wilf, is the perfect travelling companion. He likes everyone and views public places as a God sent forum to meet people and look for Jaffa Cakes and sausages. Yesterday was no exception . He trotted into the hotel lobby, sat while the doorman and reception lady chatted to him, and then did his best 'I've never been fed in my life' routine when two of the waiters came out of the restaurant to say hello. This routine works on the unwary. Within two minutes he was settled down under our feet with half a croissant. Thus far this butter rich morsel has not had a deleterious effect on the workings of his stomach. Give it time.