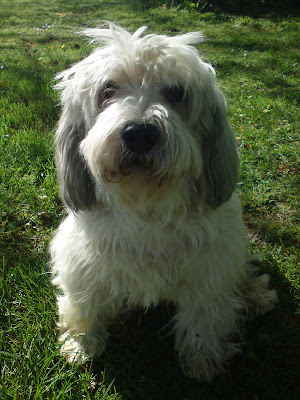 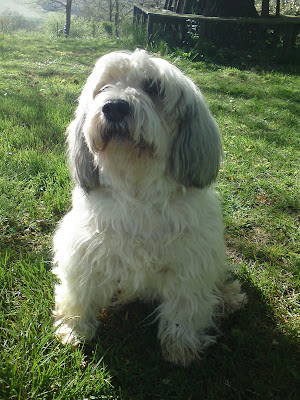 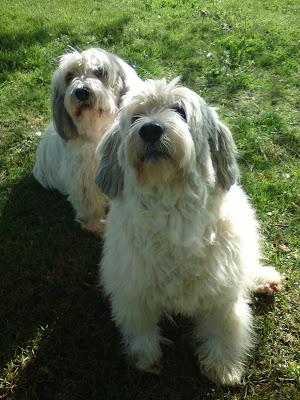 At seven yesterday evening Digby refused to eat his dinner. Loss of appetite happens from time to time so we weren't too worried. Ten minutes later he then studiously ignored his favourite treat disdainfully throwing it on the ground as if he couldn't stand the sight of it. Refusing goodies is less usual but happens when he has an upset stomach from eating something 'suspect' on one of his daily walks. We should have known something was wrong when he then settled down at the foot of the stairs oblivious to what was going on around him - his lack of curiosity unusual in a dog who thinks he both owns and runs the house.

We checked to see that his gums were red and his eyes clear. Everything seemed fine but agreed to take him to the vet if there was no improvement in his listlesness by morning. Right on queue the poor wee thing then started to tremble all over and within five minutes fell into a trance like stupor. A quick call to the angel of a vet who was just closing up for the night and we were off with him to the surgery. Within two minutes of taking a blood test she came back with the diagnosis - tick disease. The fifth case she had diagnosed that day. A dose of steroids and then an anaesthetic before administering the large and painful anti-parasite injection in a vinegar solution. Despite Frontline, a tick collar, and finger tip checks Digby had been bitten by a brown tick which had infected him with the haemorrhagic disease.

Digby finally fell asleep at four this morning after a sleepless night ( both for him and for his nursing team ).The question now is whether we've caught it before the organs start to haemorrage. We'll know later on today . I'm off for a nap now while he's still out of it and will post later. Wilf with the processionary caterpillars and now Digby with the brown ticks. Children are much easier patients.