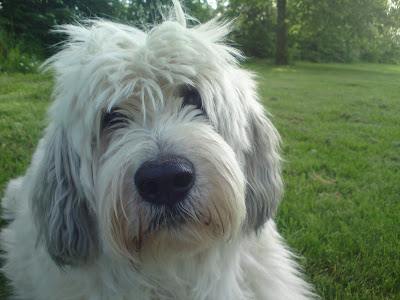 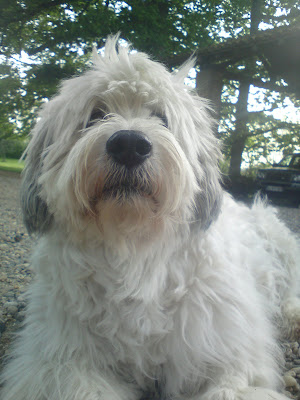 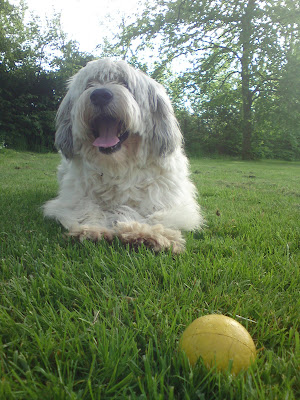 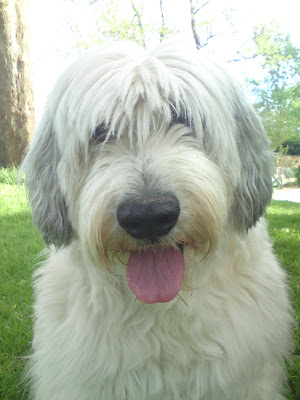 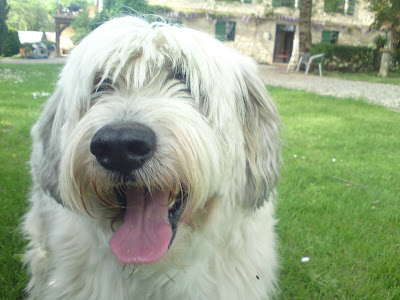 For three days last week Wilf slumped around the house like a canine version of a difficult adolescent - he didn't want to play, he didn't want to be tickled, he didn't really want to do much of anything other than eat , pretend to chase squirrels and be near his little brother. Over the last couple of days there has been a marked change in his outlook on life. With Digby slowly on the mend Wilf is once again back to being the 24/7 household jester. He is absolutely everywhere. Yesterday morning Yves, Ross the wild haired Irishman, and the morose lad in the blue bib overalls were presented with a ball within seconds of their arrival at the front door. While Ross sat in the van smiling angelically in his morphine induced haze, Yves and the lad were earning their keep by racing round the garden throwing the ball with a pouncing, yelping Wilf in hot pursuit.

The day soon got even better. As the mayor and the committee members arrived Wilf was there carefully sniffing each hand to see if they had remembered to bring sausages. Satisfied that there was nothing good to be had he settled himself down under the table where he snored manfully away while the minutes of the last meeting were read out loud. It proved to be an entertaining and useful distraction from the mordacious disagreements among the village folk over who had agreed to be responsible for what. Vol au vents remain a contentious issue. The latest rancour revolves around who will take telephone reservations for seats - the flower folk or the roads and byeways people? 'The font' displaying an unerring sense of diplomacy suggested that as everyone in the village was so busy doing so many important things perhaps the reservations could be handled by the local tourist office who have the phones and the staff. This ( to me at least ) practical suggestion will be the subject of discussion at next weeks steering committee. The gathering came to an early end when Wilf started to pass wind - an offshoot of the liver,beef and vegetable soup that was made for Digby but which Wilf wolfishly devours . Wilf, I shall be ever greatful to you for your exquisite sense of timing.

Digby is still sleeping twenty three hours a day but the gradual improvement continues. His temperature is back up to 37. Your comments about cottage cheese, scrambled eggs and other cures and treats are all duly noted and experimented with. Sourcing pumpkin for the pumpkin treats is proving to be a bit more difficult in this part of rural France. Thank you all so much.