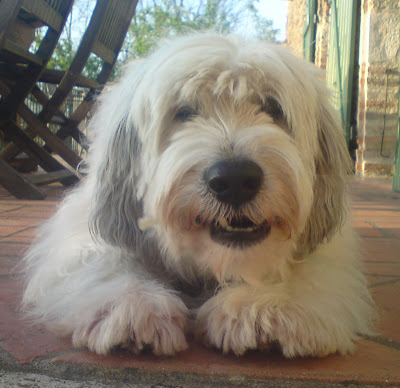 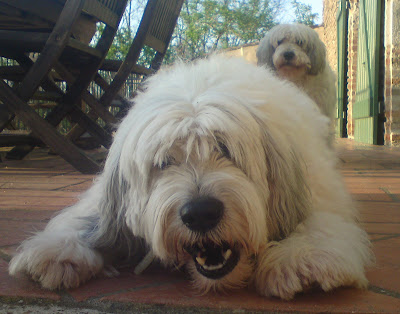 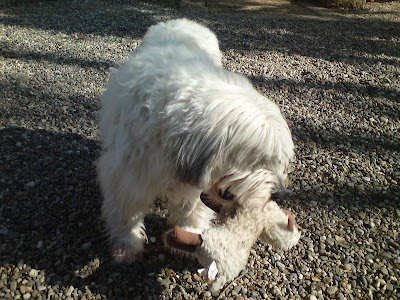 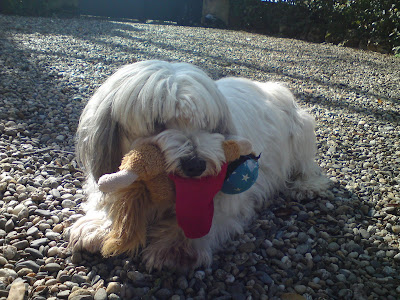 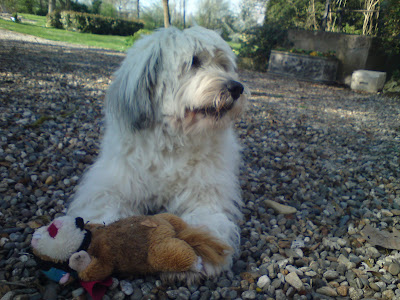 Out with the two boyz for a late evening stroll around the garden to be met by a cacophany of croaks. With the arrival of the really hot weather all the frogs in the village have gone into playful mode . The wall of noise they produced would have done justice as a backdrop to a Cecil B De Mille biblical epic. Amidst all the chirrups and ribbit-ribbits I half expected to look down and find little Moses in a wicker basket floating past on the stream.
Over the last couple of days Digby has become remarkably sprightly on his morning walk. Usually he sets of at high speed but his sore hip slows him down by the time we've covered the ten yards to the village green. However, both yesterday and today he has set off, head down in determination, and set an Olympic sprinters pace for the far end of the village. The reason for this magical transformation ? Love. The little old lady in the small cottage at the far end of the street has a foul tempered, black and grey, unkempt, snarling, and hostile to all but her mistress, canine companion by the unlikely name of Claudette. It's gene pool contains a little of everything but mostly appears to be Jack Russell and unidentifiable terrier mixed with all the charm and domesticity of a wild Pyrennean wolf. It's one of those dogs that exemplifies the old saying 'beauty lies in the eye of the beholder'. As we walked past on Saturday morning this ageing virago (the dog not the mistress) rushed out into the garden and started to madly throw itself against the garden fence, gnashing its teeth, howling and slobbering. I thought it wanted to devour both Digby and myself. Digby has however seen that underneath this brash,harsh, unwelcoming exterior lies a heart of gold. He sits in the middle of the road , head turned towards this malevolent presence, dreamily lost in a rhapsody of love. From time to time he exhales little whimpers of adoration. Dragged back homewards he turns his head back for one last glimpse of his French dream girls fangs.

With temperatures now well up into the 80's it seemed sensible to turn off the central heating boiler yesterday. 'The font' has arrived at breakfast this morning dressed like an Inuit. The phrase ' chilly today isn't it?' has been repeated three times. Wilf and Digby have even been made a bowl of warming porridge. Time me thinks to go and reset the boiler to get the heating to come on for an hour before breakfast. The Swedish tradition of theatre is still alive and well in this house.