Not without a fight. 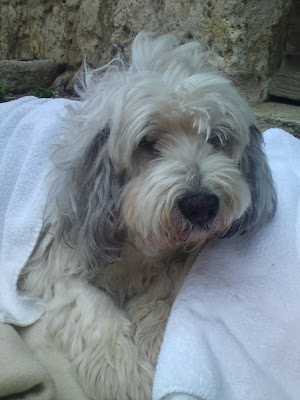 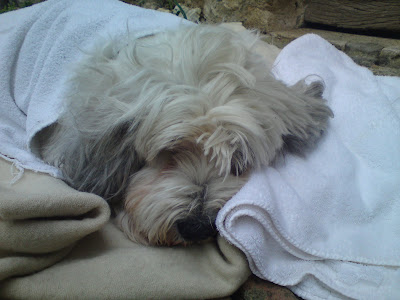 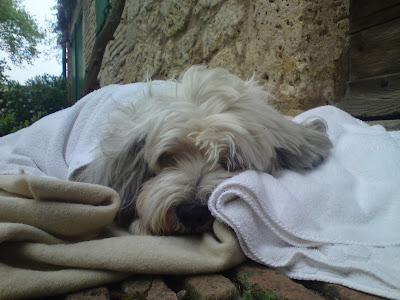 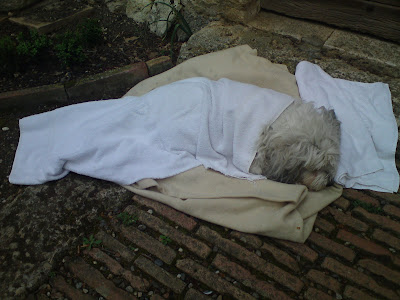 Despite being a gruff Calvinist I'm enough of a modern man to admit to having one or two moments of 'heightened' emotion yesterday when it looked as if Digby was on the home straight. The lovely vet in town told us in the nicest possible way that everything that could be done, had been done. With the red blood cell count collapsing a blood transfusion was simply out of the question and there is a limit to how much cortisone can be prescribed. At lunchtime and again at eleven last night his temperature had soared back to 40 +, his breathing was shallow and raspy, and his little body was being racked by spasms. All we could do was hold him close and let him feel our love.

Yet, here we are on Sunday morning and he's still with us. It was ,to put it mildly, a difficult night but in the wee hours of the morning I caught him looking at me with a feisty glare that seemed to say ' I'm not going without a fight'. He can't keep anything down, jaundice has set in, his temperature seems to remain determinedly elevated, and he's clearly distraught but boy he's tenacious. This morning we've carried him downstairs and laid him out by the front door on a warm bed . That way he's near his big brother. Who knows where the next few hours or days will take us but I know he's going to give it everything he's got and then some.

Thank you so much for all your comments - they mean so much. What great tenderness and care exists among people.
Posted by Angus at Sunday, April 25, 2010